Login
407.616.8108
[email protected]
HomeIn the News Glimpse the Future and Get Inspired at Maker Faire Orlando

Glimpse the Future and Get Inspired at Maker Faire Orlando

ORLANDO, Fla. (October 11, 2019) – Maker Faire Orlando is a non-profit, community-organized, family-friendly celebration featuring local do-it-yourself science, art, rockets, robots, crafts, technology, music and hands-on activities. On Nov. 9 and 10, people show what they are making and share what they are learning at the 8th annual event to be held at the Central Florida Fairgrounds. 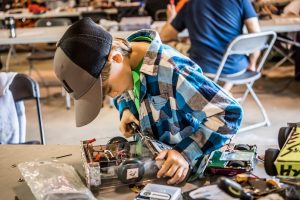 Individuals behind the exhibits are known as ‘Makers’ and range from tech enthusiasts to crafters and scientists to garage tinkerers of all ages and backgrounds. The two-day event is expected to draw 10,000+ attendees and includes 300+ local exhibits, Power Racing, Combat Robots, Nerdy Derby and much more on display throughout three air-conditioned exhibit halls, as well as, green spaces filled with hands-on activities, workshops and competitions.

Complimentary tickets are available with proper identification for First Responders, Active Military and Veterans; Pre-registered groups from Title I schools; employees of schools, colleges and universities; and homeschool educators.

Robot Ruckus is included with your Maker Faire Orlando ticket. Robot Ruckus is the largest and only live open heavyweight tournament in the United States. Event goers will see some of the amazing machines from the hit TV show BattleBots live and in-person.

The Maker Effect Foundation, producers of Maker Faire Orlando, purchased the heavyweight combat robot arena in 2018 to ensure that combat robot builders of all ages would have a place to learn, build and compete. For more information including rules, a list of BattleBots competitors expected to attend (subject to change) and other info on this exciting event, visit Robot Ruckus at https://robotruckus.org for more information.

Additionally, a VIP fundraising event will be held on Saturday, November 9 from 6 – 8 p.m. Participants will be able to meet and hear from more than a dozen elite combat robot builder teams who have competed on the BattleBots television show. Mingle with BattleBots teams, see robot exhibitions and bid on silent auction items from your favorite robot builder. Only 100 tickets will be sold for this exclusive event. Ticket information can be found at https://www.eventbrite.com/e/robot-ruckus-vip-fundraiser-tickets-67943610167.

Maker Faire originated in 2006 in the San Francisco Bay Area. It has since grown into a significant worldwide network of both flagship and independently-produced events. Maker Faire Orlando is independently organized and operated under license from Maker Media, Inc.